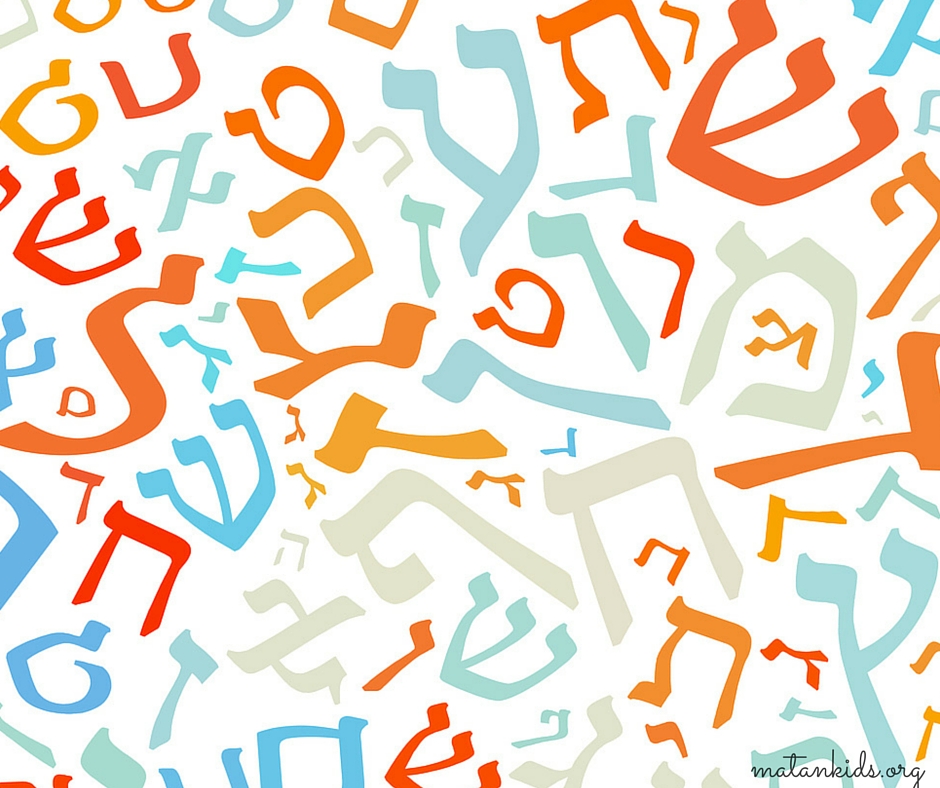 As a child, one of my favorite Jewish stories was “The Letter and the Crown” by Ted Gross, which retold a midrash called Otiot de-Rabbi Akiba (“The Letters of Rabbi Akiba”) about the letters of the Aleph Bet. Each letter came alive with its own unique personality as they competed with each other for God’s attention – each letter angling its way to begin the very first word of the Torah.

This story, based on the midrash, is like an ancient, Hebrew version of the modern, beloved children’s story and song “Chicka Chicka Boom Boom.” In “Chicka Chicka Boom Boom” the letters of the English alphabet also come alive – again vying against each other – this time in order to reach the top of a coconut tree. Eventually all the letters fall off the tree, but they are riled up once again by the letter “A” – the mischievous instigator – who taunts: “Dare, double dare, you can’t catch me. I’ll beat you to the top of the coconut tree!”

In contrast to “Chicka Chicka Boom Boom’s” impish “A,” according to the midrash of Otiot de-Rabbi Akiba, Aleph was quiet, timid and humble. All the Hebrew letters Gimmel through Tav crowded around God, clamoring for God’s attention, staking their claim to begin the Torah, yet God refused them all, until only Bet and Aleph remained as candidates.

God finally chose Bet to begin the Torah with the word Bereshit (“In the beginning”) since Bet also begins the word bracha or blessing. According to the midrash, God wanted all of humankind to know that God loves and blesses them, and that the Torah is an eternal blessing.

But what about Aleph? As the story goes, once Bet was chosen, Aleph walked away quietly. God asked Aleph, “Why didn’t you ask me to begin the Torah?” Aleph sighed and said, “I am such an unimportant letter. All the other letters are more worthy than I am! I’m only a small number, equal only to the number one.”

God cried out, “Not so, Aleph! You are the king of all letters! You are one, and so am I, and the Torah is one as well. Therefore, when I give the Torah at Mount Sinai, I will begin with you. You will be at the beginning of the Ten Commandments: ‘Anochi Hashem’, I am God.” [http://aleph.org.au/why-aleph/]

The letter aleph makes no sound of its own. Aleph raises his arms to the sky, plants his legs on the ground, opens his mouth – and yet has no voice. Aleph must rely on his support system – the vowels, and his friends – the other Hebrew letters, to give him a voice. Nevertheless, the midrash explains that God saw something special in Aleph, and chose him to begin the Ten Commandments and our Hebrew alphabet.

What do “Chicka Chicka Boom Boom” and the midrash of Otiot de-Rabbi Akiba have to do with Parshat Vayikra – the first parsha of the Book of Leviticus – which deals primarily with sacrifices and laws of purity?

Vayikra begins, unsurprisingly, with the word vayikra – “And he (God) called out.” Yet, the word vayikra looks peculiar in the Torah: the last letter of the word, which is “aleph,” appears in a small font. It’s the only time that a small aleph appears in our Torah. In Vayikra, God calls out to Moses from the Ohel Mo’ed, the Israelites’ communal gathering space, beginning an important new chapter in their journey – and yet, the story is reported for all eternity with a small aleph!

[Tweet “Small aleph reminds us to pay attention to those in our learning communities who may be timid, shy and silent”]

Here, half-way through the Torah, as we begin its third book, we recall the midrash of the Hebrew letters, a prologue of sorts to the Torah, and we are reminded of the small, silent Aleph, who was too shy to stake his claim in the Torah. The book of Vayikra – and specifically its small aleph – reminds us to pay attention to those in our learning communities who may be timid, shy and silent; to those who have not yet found their voice. Just as God calls out from the Ohel Mo’ed, so too must we reach out from our synagogues and classrooms to the “small alephs” in our midst.

Our attention is often focused on the playful “A’s” of “Chicka Chicka Boom Boom” – the mischievous instigators who cause trouble in the coconut tree, in our classrooms and in our prayer spaces. As we work to bring all our learners into the Ohel Mo’ed, we must make space for the loud A’s and for the timid alephs – they all need our attention, even as they cry out in their own ways for our love and our blessings.

Rabbi Yael Hammerman is the Director of Congregational Learning at Ansche Chesed on the Upper West Side of New York City. She was ordained by the JTS Rabbinical School and received a master’s degree from the Davidson Graduate School of Jewish Education.