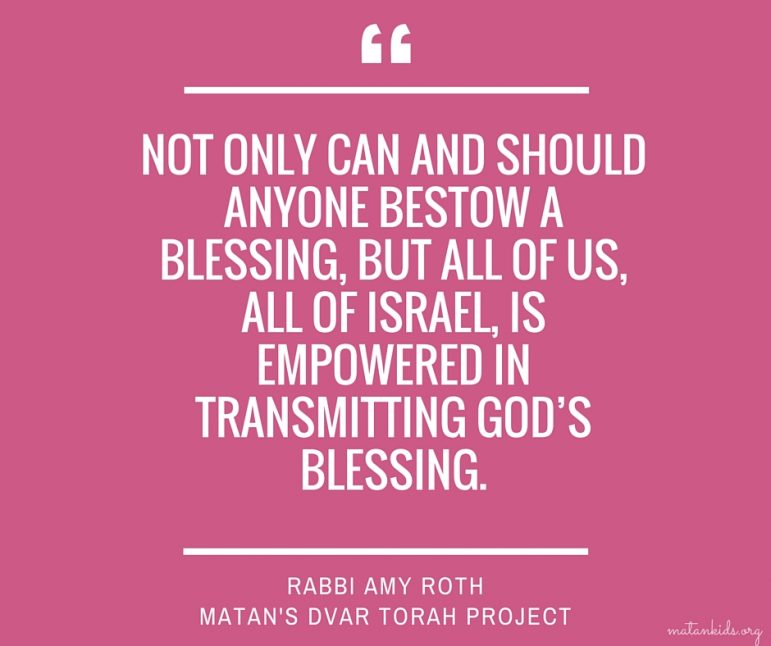 One of the “greatest hits” of Parashat Naso is a well-known passage that is both completely inclusive and also fraught with divisiveness.  In Numbers Chapter 6, verse 22, we see one of only two prescribed blessings in the entire Torah. The priestly blessing, as it is known, begins with the words, “Speak to Aaron and his sons, saying this is how you will bless the children of Israel.” Aaron and his sons, the original Kohanim, or priests, are directed to bless the rest of the people of Israel. In the context of the Torah, Aaron and company are elevated to a place where they get special treatment: they are the channel through which everyone else (i.e. non-Kohanim) are able to receive God’s blessings.  And this blessing is very specific in style and language; it is poetic and formulaic. The number of words on each line increases incrementally in a stylistic pattern.  The priests are a rarified breed: they are the ones who are responsible for all Temple rituals and worship; they are charged with the administering of the priestly blessing.

Perhaps we would be able to relegate the exclusivity of the priestly blessing to being a preserved but outdated custom of ancient Israel, were it not for the fact that it remains a staple of modern Jewish ritual. In many synagogues, Kohanim stand before the congregations and with Spock-like raised hands, bestow God’s blessing upon everyone. And while some congregations have made this into an egalitarian practice, it remains predominantly male-led. Either way, it is always led by Kohanim, or those who trace their lineage back to the original priesthood.

While not all of us are Kohanim and therefore not part of the elite, privileged group mandated to bless everyone, this blessing has another, more universal usage. The priestly blessing has evolved into being what is perhaps the most egalitarian of blessings:  that being the second part of the parental blessing of children. Traditionally done on Friday nights, as the Shabbat spirit begins to take hold of a family, parents bless their children with the ultimate of God’s gifts; shalom, peace.  This excerpt from the Torah is hereby thrown into a whole new arena.

As a parent of four, the priestly blessing is one of the more poignant rituals of our Shabbat table. When my children were young, my husband and I blessed each of them individually with the prescribed words of the blessing, and then supplemented with a “secret.” Each child would end his or her blessing with a kiss and a hug, at which time we would each whisper something personal (“mazal tov on losing your first tooth this week,” or “it was fun watching you pitch the little league game this week”) to enhance and personalize the words of the ancient blessing.  And now that my children are older and not as often at our Shabbat table, we bless them over the phone, Skype or Face Time. We no longer give them “secrets”, but our family tradition remains and continues to breathe new life into a more narrow reading of the priestly blessing.

Not only can and should anyone bestow such a blessing (truly a non-parent can certainly bless a child close to him or her) but all of us, all of Israel, is empowered in transmitting God’s blessing.  It is no longer the domain of an exclusive club of Kohanim.  As this blessing has come into the mainstream of Jewish family life, we recognize that we as a people are truly ‘mamlechet kohanim,” a kingdom of priests.  All of us.

Rabbi Amy Roth became the Director of Congregational Schools at Temple Israel of Great Neck, in 2012. She was ordained at the Jewish Theological Seminary, and received a BA from Barnard College. Rabbi Roth spent eleven years as the Associate Director of Camp Ramah in the Berkshires, where her four children grew up (one of whom was almost born there). Rabbi Roth has also served as a faculty member of the Passover Retreat at Camp Ramah Darom in Clayton, Georgia. In addition, Rabbi Roth has taught adult education mini-courses at a variety of synagogues and churches in the New York metropolitan area. Rabbi Roth grew up in Bloomfield, New Jersey, is an alum of United Synagogue Youth (USY), and is married to Rabbi Noam Marans. Together they are the parents of Daniel, Ilan, Aaron and Yael.