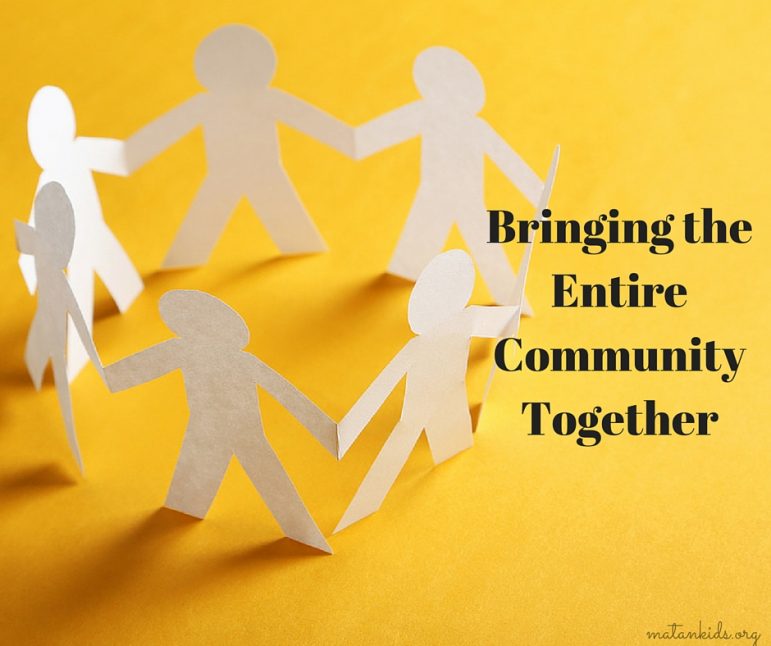 It seems fitting that Parashat Acharei Mot, which we read this week, is also read in the synagogue on Yom Kippur.  Beyond the obvious connection that the portion describes the rituals that took place in the Temple on Yom Kippur, I am struck by the pomp and circumstance that brings the entire community together. The ceremony that the High Priest conducts purifies the sanctuary and the people as one, and binds them all as one with God. It seems to be no accident that even today, Yom Kippur is the ultimate holiday of communal inclusion, when sanctuaries are expanded to accommodate additional worshipers and all individuals are treated as equals in transgression and atonement.

The highlight of the Yom Kippur ritual is the ceremony of se’ir ha-mishtale-ah, the ritual scapegoat. I imagine the people standing together as the high priest casts all of their sins together onto this goat. Similar to the al het litany of sins that are the centerpiece of today’s Yom Kippur liturgy, the enumeration of transgressions had to be done in the plural – it did not matter that some people were guilty of some while others had distinguished themselves in various ways during the year; for the purposes of atonement, everybody stood together. The text repeats the simple word “kol / all” to highlight the fact that all the people were included and all of their sins were absolved – as equals.

When comparing biblical rituals to similar rituals of the ancient world, it is important to point out the differences – even more than to acknowledge the similarities. Long after the Bible, the ancient Greeks had the annual festival of Thargelia. The most prominent feature of this agricultural festival was a purifying and expiatory ceremony, pharmakos, in which the community chose two individuals – the ugliest that could be found or individuals who were marked by physical deformities – and tortured them and expelled them from the town in order to bring about purification in times of disaster or crisis. How different the community must have been to have blamed its ills on people with disabilities. That ritual sought to purge deformity in an effort to create a model society. For the Israelites, in contrast, it was sin and misdeed – blemishes shared by all people in different ways – that caused the impurities, not the people themselves.

Yom Kippur’s message of inclusion is reiterated in the Torah’s designation of the day as a commemoration for generations to come: “This shall be to you a law for all time: In the seventh month, on the tenth day of the month, you shall practice self-denial; and you shall do no manner of work, neither the citizen nor the alien stranger who resides among you” (Leviticus 16:29). A simple interpretation of the text calls for inclusion of Jews and non-Jewish “affiliates” together in the ritual; but the commentary of Rabbi Harold Kushner in Etz Hayim adds another element of inclusion: “Each of us carries a ‘stranger’ inside us, a part of us that is alien to our essential self.” On Yom Kippur, everyone participates together and is purified as one – members of the community together with those on the outside, individuals with varying abilites together with those who have disabilities, individuals who have committed public transgressions together with those whose misdeeds are more internal. No person is free from that inner strangeness – for some, that strangeness is a disability that is apparent on the outside; for others the strangeness is more hidden. For the purpose of purification of the sanctuary, community, and individual, though, all people are equal.

The Torah summarizes the purpose of the day: “For on this day, atonement shall be made for you – [all of you, regardless of particular ability or family history] to purify you [together with the sanctuary and the entire community] of all your sins; [when the community worships together and lives together,] you shall be pure before the Lord” [Leviticus 16:30].

Michael Safra is Rabbi at B’nai Israel Congregation in Rockville, MD. Rabbi Michael Safra joined B’nai Israel after his ordination from the Jewish Theological Seminary in 2002. Rabbi Safra is primarily interested in strengthening congregational life through education at all levels. He works to broaden the variety of learning opportunities available to all members of the community, and to engage people in various aspects of this dynamic community. Committed to the Jewish community as a whole, Rabbi Safra is President of the Rabbinical Assembly Washington/Baltimore region. He serves on the boards of the Jewish Coalition Against Domestic Abuse (JCADA), Camp Ramah in New England, and the National Rabbinic Cabinet of Israel Bonds. He frequently teaches for various programs and groups in the Washington area. Rabbi Safra and his wife Sharon are the parents of three beautiful children, Rebecca, Ethan, and Gila.